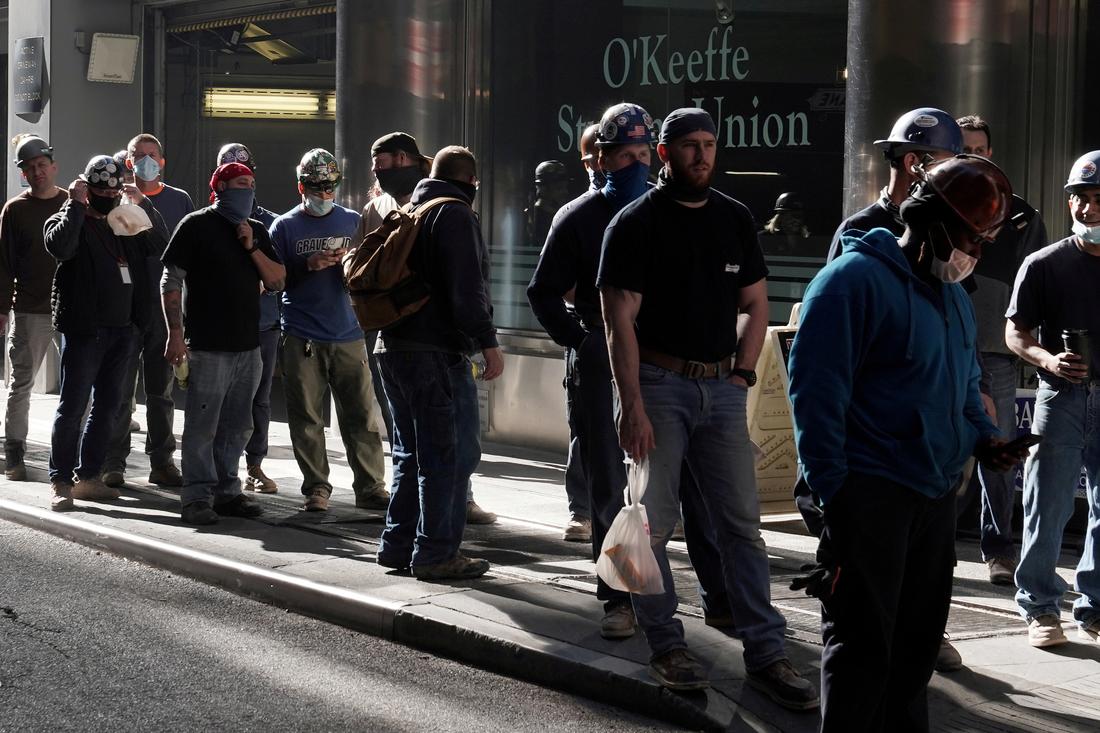 WASHINGTON (Reuters) - The U.S. economy likely created the fewest jobs in seven months in December or even shed workers as the country buckled under an onslaught of COVID-19 infections, marking the start of what is expected to be a bleak winter.

Despite the anticipated weakness in the Labor Department’s closely watched employment report on Friday, the economy is unlikely to fall back into recession, with additional pandemic relief approved by the government in late December providing a backstop. More fiscal stimulus is expected.

Biden will be sworn in on Jan. 20, with the economy recovering just over half of the 22.2 million jobs lost during the recession that started in February. At least 19 million Americans are receiving unemployment checks.

“Job growth has been decelerating, since the easy part of the recovery in the labor market, recalling workers, has mostly run its course,” said Ryan Sweet, a senior economist at Moody’s Analytics in West Chester, Pennsylvania. “Surging COVID-19 cases and tighter restrictions to contain the spread of the virus were a heavy weight on the job market in December.”

Nonfarm payrolls likely increased by 77,000 jobs last month after rising 245,000 in November, according to a Reuters survey of economists.

There is even a strong possibility that payrolls dropped in December, which would end a seven-month hiring streak. First-time applications for unemployment benefits spiked in mid-December when employers were surveyed for the employment report.

Companies announced a 18.9% surge in layoffs last month, and a measure of service industry employment contracted. Consumers were also very downbeat in their assessment of the labor market.

But any decline in payrolls will likely not mark the start of job losses. Congress last week approved nearly $900 billion in additional stimulus, which is expected to lift household income and consumer spending. Economists anticipate the Biden administration will provide another package by March and boost infrastructure spending.

There is also optimism that the rollout of coronavirus vaccines will be better coordinated under the new government.

“We are in the middle of a slowdown that needs to get through the holiday shutdowns and the virus surge,” said Joel Naroff, chief economist at Naroff Economics in Holland, Pennsylvania.

“Hopefully, we will see better coordination on the vaccination front, but given the indifference to health shown by the population over the past few months, it is hard to see that the virus surge will do anything but get worse before it gets better.”

Payrolls last month were probably held back by job losses in the leisure and hospitality sectors, with most jurisdictions banning indoor dining. Manufacturing and construction industries likely hired more workers to meet strong demand for goods like motor vehicles and houses. That underscores what has come to be known as a K-shaped recovery, where better-paid workers are doing well while lower-paid workers are struggling.

Government employment likely decreased for a fourth straight month. Most of the job losses have been in local government education, with most schools having shifted to online learning.

The unemployment rate is forecast to have risen to 6.8% in December from 6.7% in November. The jobless rate has been understated by people misclassifying themselves as being “employed but absent from work.”

The government will on Friday revise the household survey series from which the unemployment rate is derived, going back five years. The revisions are, however, not expected to correct the classification error.

“Given the massive swings in most major household survey series in 2020, those revisions are likely to be larger than usual this year, but they will not, obviously, alter the basic storyline of a steep decline in employment in the spring followed by a sustained but incomplete recovery in the ensuing months,” said Lou Crandall, chief economist at Wrightson ICAP in Jersey City.

The revisions will include the labor force participation rate, or the proportion of working-age Americans who have a job or are looking for one, as well as the employment-to-population ratio, which is viewed as a measure of an economy’s ability to create employment.